Planes of the head

Artists often like to reduce organic forms to something simpler, to make them easier to grasp, and reducing the complex, rounded surfaces of the human body to a relatively small number of planes can greatly clarify its relationship to space and to light. Similarly, when we apply light to a figure, a strong light will make the patterns of light and dark clearer than a diffuse one. For realist artists at least, the important thing is understanding what happens in nature so that we can reproduce it.

A plane is a flat surface. Each change of direction creates a new plane, and planes in combination make up the surface of a form. A cube has six sides, i.e. six planes. An object like a nose or an ear, or an entire human being, is not made of flat surfaces, but a curved form can be built up using flat planes if we apply a series of increasingly small ones. Glenn Vilppu likens it to “starting a sculpture with a square block of stone and progressively removing corners until the desired forms emerge out of the surfaces”. Sketching the planes is a good way to establish a head’s general form before you start worrying about the complexities of the features.

Finding planes on the human head


We need to identify the major planes: reducing the head to its most basic pattern of surfaces. There are various legitimate ways of interpreting the planes, and we shouldn’t get hung up on which is ‘correct’. The model below is not meant to be definitive.

Study these planes. If you like, find other interpretations of the planes of the head and study those too. (For example, the artist James Gurney has a couple of lovely examples on his blog.) This is a generic model but in reality, every head has its own individual planes.

We first introduced the head as a sphere, later as an egg. In reality it is a combination of roundness and squareness. An artist can emphasise the smoothness and soft roundness of a head, or the chiselled, geometric squareness of a head, or find a balance incorporating both. The path you take depends on your artistic intentions. The middle path is to soften the planes enough to create realistic flesh while squaring them off in key places to preserve some draughtsmanlike solidity and character.

You may wish to place less emphasis on angular planes when drawing women, as they tend to have softer contours than men.

Your next step is to draw a series of heads with the planes indicated, at various angles. For each head, use the divided ball and plane method to plan it out, then sketch the features and planes together. One way to make it easier is to trace over photos, which is a perfectly good way to learn. You don’t have to limit yourself to the same planes as my diagram above: try and spot the particular planes of the head in front of you. 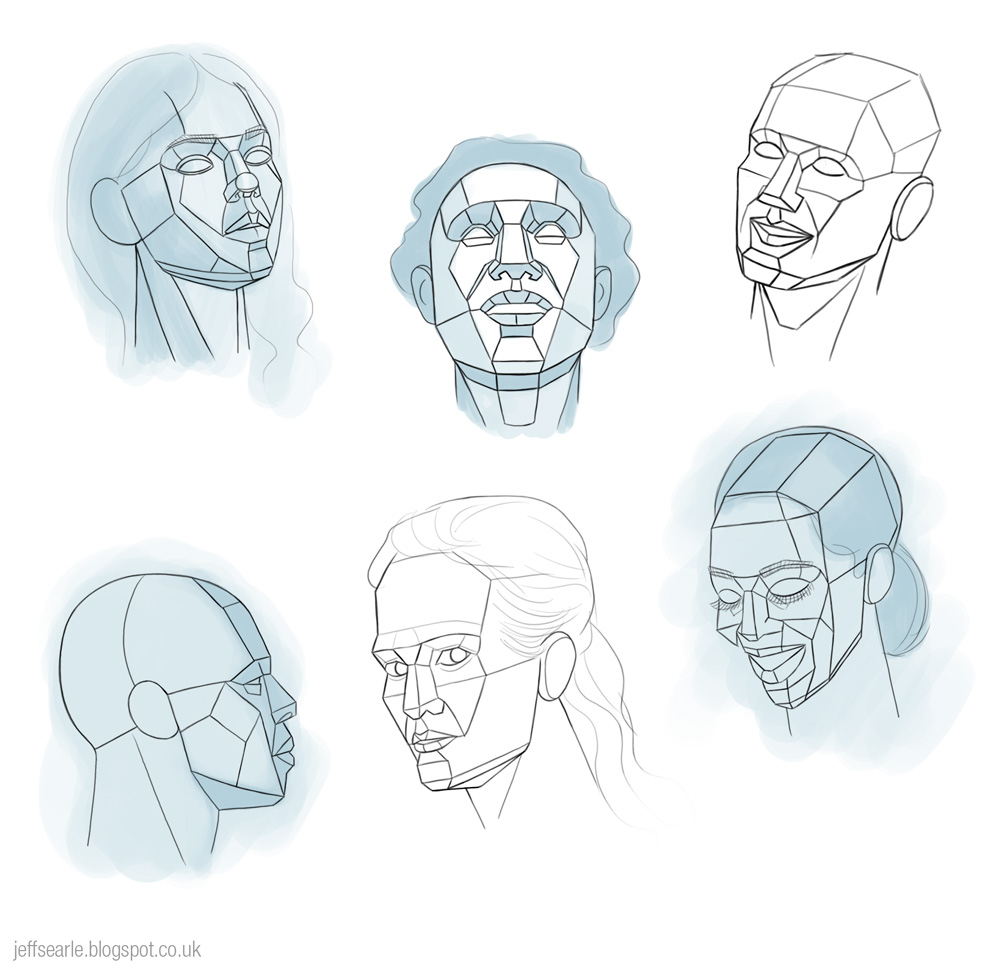 
Why approach the head this way? Because you can understand forms better when you imagine them in simpler terms. When you’re drawing a portrait, planes serve as an analytical basis for rendering the head in light and shadow. You can then gradually break down the hard edges and blend things together. It’s much better to get your basic construction and lighting right at the beginning than to spend hours on something that might turn out to be wrong.

Planes also start you thinking about perspective. I won’t discuss perspective right now, but in realist art not only does every object have to be three-dimensional, it has to occupy a three-dimensional space, even when you don’t draw that space explicitly. A head is seen at an angle, at an eye level and relates to a horizon.

Once you understand planes, your knowledge will start to appear in your drawings, giving your heads further three-dimensionality, solidity and character.


It’s easy for someone to say “draw the planes on the head at various angles”, but it’s not so easy to do when you’re a beginner. If you find imagining the planes difficult, you could try using a maquette or model, either bought or one you’ve made yourself. Such maquettes, by their nature as actual three-dimensional objects, force you to resolve any uncertainties about what planes are needed and how they fit together. In a drawing you can fudge the geometry, in a model you can’t.

If you point a lamp at the head and move it around, you can see how the light falls: planes hit directly by the light will be well-lit, planes that turn away will be in degrees of half-tone, and planes facing directly away from the light will be the darkest.

A readymade head you can buy online is the ‘planes of the head’ sculpture by John Asaro, whose purpose is to train students and artists. The planes on either side of the head are shown with different degrees of detail. 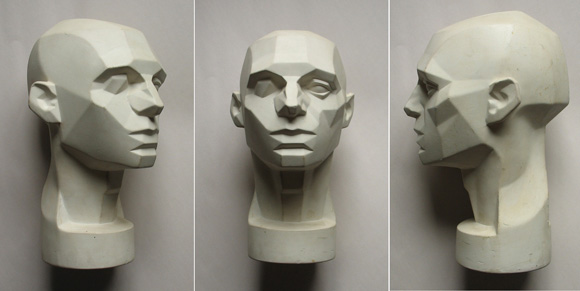 Images from a series of photos of the Asaro head available on one of the Polycount.com forums.

I haven’t used this or any other maquette myself so I can’t recommend it and won’t say much more, except that using a physical model will help give you a much clearer sense of the three-dimensionality of your drawings. What artists generally do is create an abstract model of the human head or body in their imaginations, which they refer back to again and again, manipulating it to match the individual they’re drawing. Remember, when you draw you are describing form. By getting to know a three-dimensional object intimately – regular life drawing works the same way – you are helping to create a mental model that will make your sense of form stronger.

Email ThisBlogThis!Share to TwitterShare to FacebookShare to Pinterest
Labels: Heads, How to draw

I welcome contributions to this blog. Comments are moderated.

Jeff Searle
Freelance graphic designer. Recently earned an MA in Aesthetics and Art Theory. My blog is, in various ways, about art, except when it isn’t.
NB: I occasionally amend or add to old articles to make them better.